Ray tracing in one weekend ShaderToy 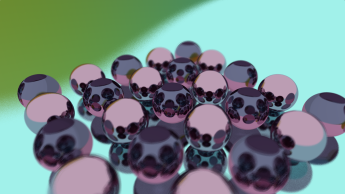 A shader implemented in Shadertoy interface which offers the simple path tracer which is discussed in “Ray tracing in one weekend” book by Peter Shirely. You can find more information in “Path tracing” shadertoy blog post.

In addition, the shader can be found here: https://www.shadertoy.com/view/4t3Xzl

In many scientific and engineering areas, CAD models are constructed by combining simple primitives using Boolean set operations. Rendering such a datas

et usually requires a preprocess, where the surface of the CAD model is approximated by an often highly complex triangle mesh. Real-time ray tracing provides an alternative to triangle rasterization as it allows for the direct visualization of (higher-order) solid and planar primitives without having to triangulate them. Additionally, Boolean compositing operations can be performed implicitly per ray, primitives have low storage requirements, and curved surfaces appear pixel-accurate. In this paper we demonstrate these properties using massive real-world CAD models

Ray-traced global illumination (GI) algorithms are becoming widresult.pngespread in real-time applications and computer video games. Path tracing is a common rendering technique to render images with global illumination effect. Low performance of these algorithms, makes their usage limited. To speed up these algorithms, some acceleration hierarchy like Kd-tree, BSP-tree, etc. is used. Typically, BVH-Trees are used to accelerate 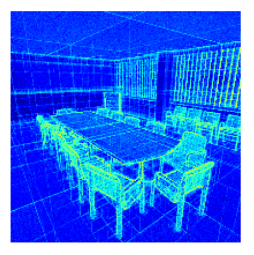 path-tracing algorithms. Recently, these algorithms are run in real time on CPUs and GPUs but the ray coherency after the first bounce becomes too low; As mentioned by related works. As CPUs and GPUs use wide SIMD units, gaining high coherency on these units is very important. A coherency improvement mechanism can be used to restore the ray coherency. In this guided research, we investigated the impact of ray sorting on execution coherency of processor’s SIMD units. Our measurements show that execution coherency is increased by sorting the secondary rays but the coherency improvements are not as much as we expected and was presented by other papers. The scenes which are rendered in our approach are voxelized and stored in Boundary Volume Hierarchy (BVH) acceleration hierarchy. Furthermore, the voxel-based path-tracer is used as global illumination technique.